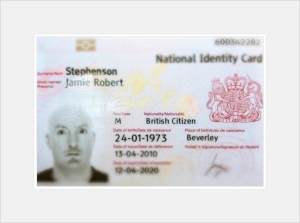 I saw a post on Facebook recently of a friend who’d got to the Channel Tunnel and realised she’d forgotten her passport. That and the ensuing conversation which mentioned identity cards got me thinking about a couple of occasions where I’ve nearly had to miss a job because I’ve done something similar.

In all the time I’ve been a brand ambassador, I’ve never missed a job through fault of my own, in fact, I’ve only ever missed one scheduled job in which I had to invoke my force majeur clause in my contract due to the train lines between the North-West and Scotland being closed with heavy snow.

But here are the close shaves!

The first one was when I was due to be taking a flight from Manchester to Inverness. Because it was a domestic flight and I’d checked in online, I arrived at the airport a half-hour before departure only to get to the desk and realise I’d taken my wallet out of my bag and left it at home. I had no photo ID, in fact I had nothing at all – no bank cards, money or anything. There was no time to get home and back in time and the next flight was the next day by which time I’d have missed the sessions I was going for.

Amazingly, the lady on the desk told me not to panic, made a phone call and proceeded to tell me that everything was okay and I could go through and board as normal – I was so relieved! (I guess I’ve got a trustworthy face).

The second occasion was one where the journey was just one nightmare after another anyway. I was to be doing staff training for a ferry line and I was heading down to Portsmouth to do it. I got stuck at Waterloo for hours because the line was closed due to a fatality – fortunately I’d left plenty of time and took the delay in my stride. We finally set off from London and got within a half-hour of Portsmouth when we had toots because there was another fatality on the line just ahead of us and we had to wait for ages for them to sort taxis out to get us into the town.

I still managed to get to the terminal in time to have something to eat before getting ready to board and I was sat eating when the thought came to me “I wonder if I should have brought my passport?!) Obviously we were heading out of territorial waters and of course I’d need it but I never really absorbed the fact i was going to France because I wasn’t disembarking. The lady at the desk said she’d have to wait for the captain to get into port and he would decide whether I could travel or not.

Well, luck was still on my side because the captain said I could board but I had to sign a piece of paper saying I wouldn’t try to get off the boat in France. Phew – on board and job done.

The hardest part was getting back into the country – the immigration people were furious the captain had let me board knowing I didn’t have a passport and I had to wait a half-hour or so whilst my story and scan of my passport which I keep in my phone and iPad went up the chain until finally I was allowed back into the country.

The last time was when I was heading out to Kenya. I was flying out on the Sunday night and my wife and I had gone down a couple of days earlier to stay in London before I set off and she returned to Manchester.

At some point we were having a conversation whilst sitting on a platform in East Ham and she mentioned the word passport which triggered something in my consciousness that at no point during my packing did I pick up my passport. No amount of lagging or pleading at Heathrow would get me out of that one so Sunday saw me getting a train to Manchester and back to pick up my passport before making it to the airport in plenty of time.

I will readily admit I’ve had more than my fair share of luck as on another day. or with other people, it could have been a different story but they are the only close shaves in many, many hours of travelling so I’m confident I must be doing something right.