Being such a simple drink using common ingredients, it’s no wonder that the drink we know as the Daiquirí has an older sibling.

A drink called the Canchánchara was present during the Cuban’s first attempt to overthrow the Spanish in the 1860s. The Mambises would have flasks of Rum. lime juice and molasses strapped to their saddles for fortification during their skirmishes.

The Daiquirí as we know it came about in 1898. Jennings Stockton Cox, the General Manager of the Spanish-American Mining Company based in the town of Daiquirí, near Santiago and his colleague F.D. Pagliuchi had got their hearts set upon after-work bevvies one day but realised that their usual tipples were out of stock. Cox shook up some Bacardi, lime juice and sugar and when Pagliuchi tried it, he asked what it was called. “It doesn’t have a name so it must be a Rum Sour” came the reply to which Pagliuchi retorted ” That’s no name for such a fine exquisite cocktail! We’ll call it a Daiquirí”

Cox introduced the Daiquirí to Admiral Lucius W. Johnson who took it back to Washington DC in 1909 where it became a popular drink at the Army & Navy Club.

In post-revolution Cuba the Daiquirí became a fashionable drink and was popular at the Venus Hotel in Santiago and also at the Plaza Hotel in Havana but it really took off at La Floridita where Constantino Ribalaigua Vert, who took over the venue in 1918, introduced no fewer than five new versions of the cocktail.

La Floridita became known as La Cuna del Daiquirí  – the cradle of the Daiquirí and Ernest Hemingway had his own place at the bar where he would, at 11 o’clock each day, imbibe a couple before going about his business.

Hemingway was convinced he had diabetes and asked for a special version to be made which had more rum and no sugar. Constantino obliged and this became known as the ‘Daiquirí Como Papa’. At a later date, Antonio Meilan added grapefruit juice and maraschino and it was renamed the Hemingway Special or ‘Papa Doble’.

The secret to making a good Daiquirí is to preserve the balance between spirit, acidity and sweetness. One really shouldn’t get too hung up about the rum or bleat on too much about ‘original’ or ‘authentic’. Certainly it should be made with a young, light molasses-based spirit in my opinion. Neither the Havana Club rum of today nor the Bacardi Carta Blanca are close to the original rum used by Cox but both are perfectly acceptable in the modern era.

The Bacardi 1909 heritage bottling at 44.5% ABV is about the closest you can get and it really does make the difference in this drink.

Muddle the pineapple and chilli in the bottom of a cocktail shaker, add the other ingredients and shake very well.

Fine strain into a chilled coupette and garnish with a slice of pineapple and chilli.
The chilli should just provide a gentle warmth to the drink and not be fiery. 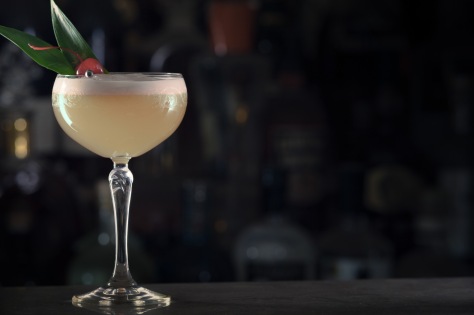